My NAMA Fly In Diary – By Jen Tonio

I had the opportunity to attend the NAMA Fly In for the second year in a row. Many people ask what the experience is like and if it is worth going. I can’t express more how great of an experience it is and how much of an impact it has on our industry.

Here is a recap of my experience this year.

We decided to fly in a day early this year to get a jump on everything. After we checked into the Fairmont hotel and got settled in we met back in the lobby where we ran into quite a few other Fly In attendees. This gave us an opportunity to touch base with some key people and give us a little extra networking time before the next day’s events. 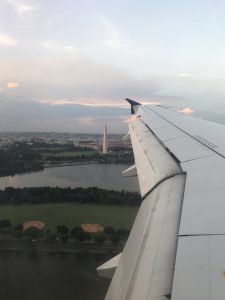 A great view of the Washington Monument while flying into D.C.

After breakfast I took advantage of the weather and extra time I had and went for a run down by the Potomac River and through the National Mall. This was probably one of the best runs I’ve had in a while. You can’t beat those sights! There are some great trails around D.C. and I would love to try and organize a group run for next year’s Fly In. 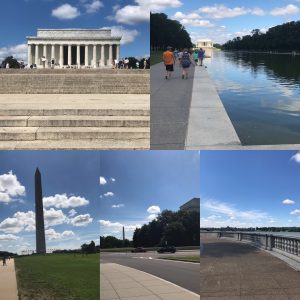 Views from my morning run.

I joined other Fly In Veterans aka “Advanced Advocates” for our education session with Amy Showalter from the Showalter Group, Inc. Amy specializes in helping organizations advance their cause in the legislative process. She gave a great presentation on how we should tell our story for max impact. One key take-away or “Amyisms” is…

Amyism #47 – Government Relations and Narrative: “As influence agents, we must learn to think in story, talk in story, and present our arguments in a narrative form. Because story can persuade and inspire where reason and logic and argument fall flat. – Kelton Rhoads, PHD”

What does she mean by this? It is important to tell the story about your company and how you got started, the struggles you overcame and where you are today. Your story will help build an emotional response from those listening to you. 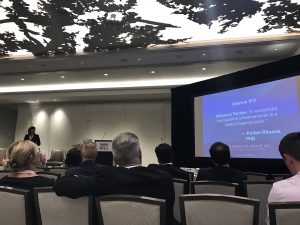 The welcome reception opened with remarks from George Sifakis, Director of the Office of Public Liaison for the Whitehouse. Following his speech we had the opportunity to network with attendees before sitting down for dinner. I was happy to get together with fellow ELN members to chat and get a group pic. I was impressed by the amount of ELN members present at the Fly In and am excited to see what the future of our industry has in store for us. 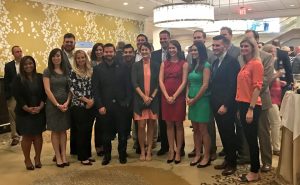 Dinner began with a trophy presentation to the state with the most attendees – which was….Maryland. Congrats Maryland! I’m pushing for more attendees from Michigan next year! Following the trophy presentation, Carla Balakgie, NAMA, President & CEO and Eric Dell, Senior Vice President of Government Affairs for NAMA, took the stage to thank everyone and go over a few key statistics surrounding advocacy in our industry and the NAMA Fly In. We were pleased to see that Michigan has lead the way with advocacy days this year with 35!

Rob Engstrom, Senior Vice President, Political Affairs and Federal Relations and National Political Director, U.S. Chamber of Commerce was our dinner speaker. He took the time to give the 300+ NAMA attendees some great political insight and explained the importance of advocacy and how impactful we are because of the size of our group. (Our group is one of the largest advocacy groups to come to D.C.) 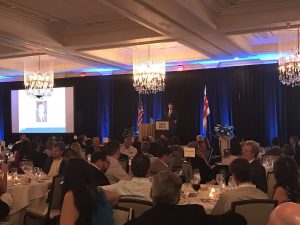 Rob Engstrom from the US Chamber of Commerce speaking to all of the fly in attendees.

It was a perfect night for the boat tour along the Potomac River where we had spectacular views of the Lincoln Memorial, Washington Monument and Kennedy Center. 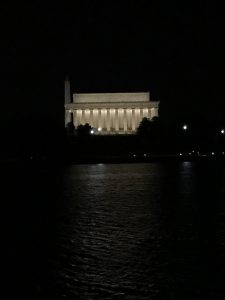 View of Lincoln Memorial & Washington Monument during the boat tour.

There were 5 buses that took the 300+ NAMA members to Capitol Hill. 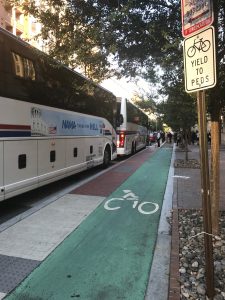 Once everyone arrived we took a group picture and then pictures of each State group. 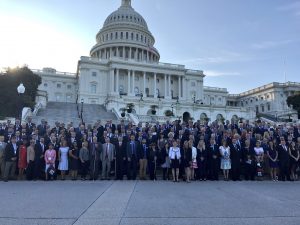 We had 7 meetings lined up with Senators and House Representatives from Michigan but the first meeting wasn’t until 10:00 am so our group headed over to the Hart building to have breakfast in the cafeteria there.

Since there was a lot going on in D.C. that week we were honored to still get to meet with staff from the offices of Sen. Debbie Stabenow, Rep. Fred Upton, Rep. Justin Amash, Rep. Brenda Lawrence and Rep. Bill Huizenga. We were very pleased to get to meet with Rep. Paul Mitchell himself and had a great meeting discussing the issues while he was on recess from House meetings. We also got to meet with our friend Rep. Dave Trott , who as a result of one of the previous NAMA Fly In events, has visited our headquarters in Troy, MI. 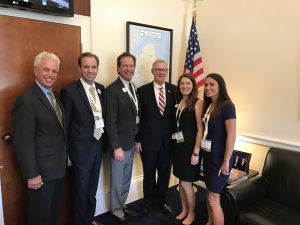 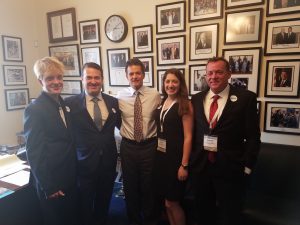 Our group representing NAMA from Michigan was very diverse which gave us an advantage while talking with members of Congress. Beyond the 6 of us from 365, we had father and son team -Jeff & Devin Smith from All Star Services, Inc. who had a great story to tell for small business tax reform and the estate tax. Also part of our team was Mike Knowlton from Kellogg who could speak directly about front of package labeling. This is one of the great things about the Fly-In, coming together with fellow NAMA members to lobby for issues related to our industry and build relationships with Operators, Manufacturers and Suppliers.

In between meeting we joined fellow industry advocates, Congressmen/Congresswomen and staff for lunch, networking and packing backpacks for military families with Operation Homefront. 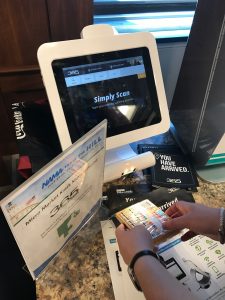 The 365 nanomarket displayed at the Connivence Services Event.

At this time I loaded up on the bus with the last group and headed back to the hotel before catching my flight. Since I had an earlier flight I wasn’t able to make the post event happy hour but I will be sure to make it next year. Each of the networking events were great opportunities to get to know everyone who was there. It’s a completely different feel than tradeshow networking events since everyone is there for the same purpose so all of the conversations we have are very beneficial.

The NAMA team did an amazing job putting everything together from the education sessions, to the networking events and of course scheduling all of the meetings with our state representatives. This is a great experience and I highly recommend it to everyone in our industry. Let’s fly in an even larger group next year!

About the Author: Linde Hutson